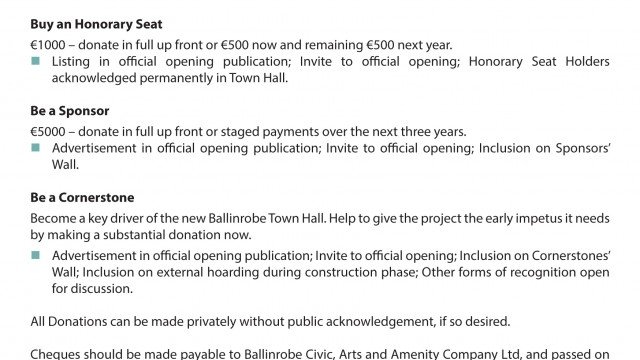 A target of €400,000 in business and private contributions has been set by the campaign to rebuild Ballinrobe Town Hall. 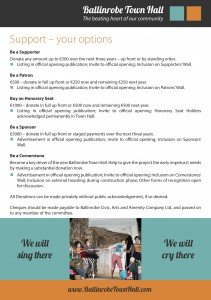 Locals have been urged to support the effort to build a town hall on the site where the previous one existed from 1886 to 1996. A variety of support options were outlined at the campaign’s fund-raising launch in Flannery’s Bar & Restaurant, Ballinrobe, on Wednesday, March 9.

“We estimate that we will receive between €800,000 and €900,000 in local and central Government and agency funding, which will require Ballinrobe to come up with approximately €400,000 to fund the project. The overall cost has been independently costed at just short of €1.3m,” said Michael, Chairman, Ballinrobe Civic, Arts and Amenity Co. Ltd, speaking at the launch.

“It is not going to be easy but with effort comes attainment. We are calling on everybody with a love of Ballinrobe to support this project. To be blunt, this project needs you to dig deep into your pockets.  The town hall will not build itself.

“As a community, we have this opportunity now to invest in our town for current and future generations. Let’s not miss it.”

The proposal is to build a hall with a gross floor area of 1000m2. It will consist of an auditorium and main hall area with seating for over 400 people. Building is expected to start in late 2017 / early 2018 with an 18-month building timeline.

There is provision for a lighting gantry, incorporated sound systems and acoustic ceilings in order to maximise the variety of uses from the point of view of musical entertainment. The plans were drawn up by Ballinrobe-based chartered architectural and planning consultant Donal McCormack.

Mr Sweeney said that the restoration of a town hall was a crucial project for the town. “The old Town Hall provided a suitable space for a variety of events,” he said.

“It was a place to socialise, to celebrate and to fund-raise. It afforded young people their first opportunity to perform on stage.

“It allowed touring acts to perform.  It was the venue in the 1960s for the drama festivals.

“The renowned English-based Glyndebourne Opera Company performed there on a number of occasions. It was the location for the birth and rebirth of Ballinrobe Musical Society which has achieved national acclaim.

“It catered for ceilis, concerts, feiseanna, social dancing, bingo and large meetings. All these events can return or be accommodated more comfortably in the proposed new building.”

Donate any amount up to €500 over the next three years – up front or by standing order.

€5000 – donate in full up front or staged payments over the next three years.

Become a key driver of the new Ballinrobe Town Hall. Help to give the project the early impetus it needs by making a substantial donation now. 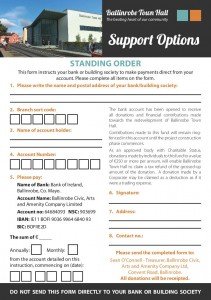