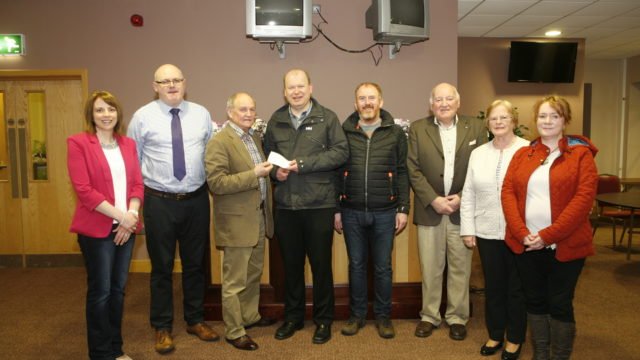 Ballinrobe Musical Society recently handed over a €1,400 cheque to the Campaign to Rebuild Ballinrobe Town Hall.

The cheque was made up of the proceeds of the raffle on one of the nights the society staged ‘9 to 5, The Musical’, earlier this year.

“We are delighted to support the major effort now underway to rebuild the town hall here in Ballinrobe,” said society chairperson Des Treacy.

“It will be a wonderful facility for the town and surrounding regions.”

Ballinrobe Town Hall chairperson Michael Sweeney, who is also an active member of the musical society, thanked the society for their “generous gesture”, and urged other local community groups and organisations to follow suit.

“We have had great support from a variety of groups, and some others have events and fund-raisers in the pipeline. We will need it all to realise our dream of rebuilding the town hall,” said Michael.

A target of €400,000 in business and private contributions has been set as Ballinrobe aims to restore the old Hall, which closed in 1996.