The Kube’ comes to Ballinrobe as major town hall fund-raiser

‘The Kube’, a fun game show based on the hugely popular ITV programme ‘The Cube’, is set to come to Ballinrobe – and the SOS has gone out for 36 people who wish to participate.

Contestants from the south Mayo / north Galway region will take part in the event at The Pavilion, Ballinrobe Racecourse, on Saturday, May 20, at 8pm. Admission will be €20, with family tickets (2 adults and 2 children) at €50, and the total prize fund is €1000.

All proceeds from the fund-raiser will go to the campaign to rebuild Ballinrobe Town Hall. The event is run by a professional Dublin-based company whose lighting, set design and general presentation will ensure a real party atmosphere – the event will feature a late bar and disco.

The search is on for 36 contestants to compete for the prize fund in the ultimate battle of skill and nerve. 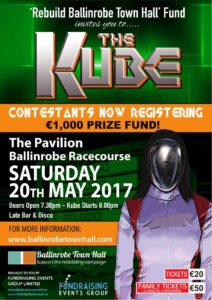 Clubs and organisations wishing to avail of ‘The Kube’ as their way of supporting the campaign to rebuild Ballinrobe Town Hall can do so by contacting the chairperson of the organising committee Pat McGovern (085 174 2082, patmcgovern3@gmail.com).

The major door-to-door fund-raising drive in Ballinrobe to rebuild the local Town Hall has passed the €155,000 mark – and now the committee are focusing on reaching the local contribution target of €400,000.

Ballinrobe aims to restore the old Hall, which closed in 1996.