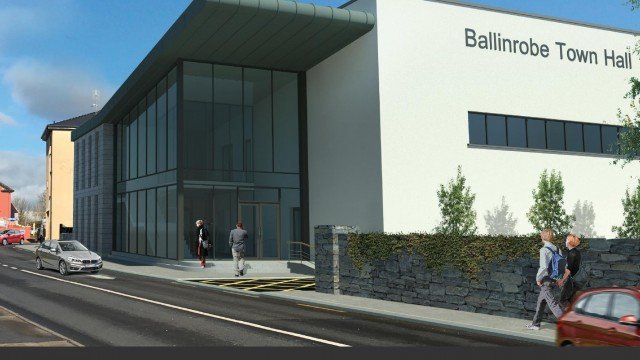 The campaign to rebuild the new 400-seater Ballinrobe Town Hall last week entered another phase when the project went to tender.

Interested construction companies have until September 25th to submit their tenders and it is hoped that work will start on the building early in 2020.

The tender was placed on the eTenders procurement website on Wednesday.

“The work consists of the construction of the town hall building together with associated external works to first-class quality trade standards; testing, commissioning and demonstration of building services and facilities; handing over of Operations and Maintenance (O&M)/Safety File Manuals; and leaving a clean and fully validated building for final occupation and use,” said Michael Sweeney, chairperson, Ballinrobe Town Hall committee.

The hall will feature a gross floor area of 1000m2. It will consist of an auditorium and main hall area with seating for over 400 people.

Michael Ring, Minister for Rural and Community Development, recently announced €750,000 and €300,000 in Department and LEADER funding respectively. Those figures supplement €200,000 already allocated by Mayo County Council and almost €400,000 raised by the Ballinrobe committee.

The result of the tendering process will offer a clear view of the overall project cost.

“The old Town Hall closed in 1996 and was later knocked for safety reasons. The current committee has worked tirelessly for the past five years to advance the project, and it is very gratifying for all involved that it is now poised to come to fruition,” Michael added.

Planning permission for the hall was granted in late 2015.