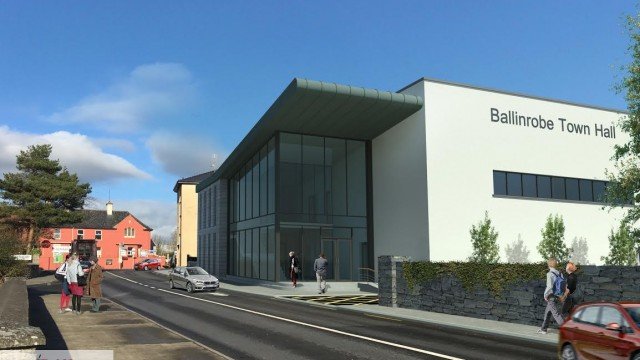 It’s all systems go now for the campaign to rebuild Ballinrobe Town Hall following Minister Michael Ring’s announcement of over €1m in funding on Friday last.

“This is the shot in the arm we needed. It’s the green light, and it means we can now finalise the tender documents, select a contractor and hopefully start work early next year. Completion date for the new Town Hall should be mid-2021,” said Michael Sweeney, chairperson, Ballinrobe Town Hall committee.

Mr Ring, Minister for Rural and Community Development, announced €750,000 in Department funding and €300,000 in LEADER funding on Friday. He was in Ballinrobe to officially open Phase One of the Bowers Walk project, another important local amenity in the town.

“The old Town Hall closed in 1996 and was later knocked for safety reasons. The current committee has worked tirelessly for the past five years to advance the project, and it is very gratifying for all involved that it is now poised to come to fruition,” Michael added.

“The local contribution of €400,000 was very important. That convinced everyone – local and national Government, and LEADER – that the Ballinrobe community wanted a new Town Hall and was prepared to put its money where its mouth was.

“We are very grateful to all the local private residents and businesspeople who contributed, those who organised fund-raising events and carried out the door-to-door collection throughout the parish. All of these will be publicly acknowledged in due course.

“The support of Minister Ring has also been crucial. From the first time we engaged with him about this project, he has been very positive and really encouraged us to press ahead. Our motivation has always been to give Ballinrobe a Town Hall of which it can be proud, a place where the community can gather.

“We also acknowledge the support of South West Mayo Development Company, who administer the LEADER programme in Mayo, including Gerry O’Neill and Norita Clesham and other members of their staff. Mayo County Council, too, have been extremely supportive, including CEO Peter Hynes and his staff, and our local councillors Michael Burke, Damien Ryan and Patsy O’Brien, all of whom are members of our committee.”

The announcement comes as the recently launched Believe in Ballinrobe initiative gathers momentum locally, and the hall is set to be a flagship project for the south Mayo town in the coming years.

The plans were drawn up by Ballinrobe-based chartered architectural and planning consultant Donal McCormack. Planning permission for the hall was granted in late 2015.