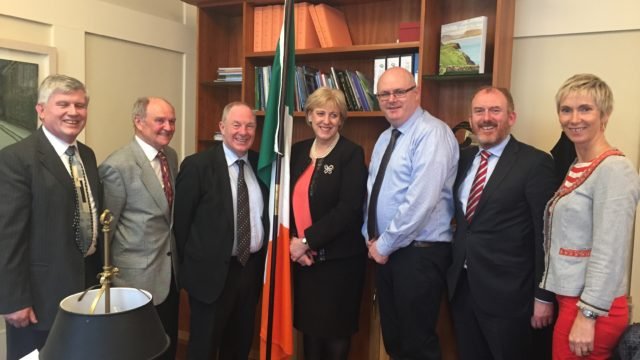 A delegation from the Campaign to Rebuild Ballinrobe Town Hall recently travelled to Government buildings in Dublin to meet with Heather Humphreys, Minister for Arts, Heritage, Regional, Rural and Gaeltacht Affairs, to press the case for Government funding.

A total of approximately €1.5 million is needed to complete the town hall project, and the steering committee is hoping for a Government injection of €500,000.

The meeting was facilitated by An Taoiseach Enda Kenny, and Michael Ring, Minister of State for Regional Economic Development. Minister Ring also attended.

“We were very happy with the reception we got, and the interest shown in the project by Minister Humphreys. We highlighted the value of a rebuilt town hall to Ballinrobe and the south Mayo region, and the clearly-illustrated local interest in such a facility,” said chairman Michael Sweeney.

“Minister Humphreys was very impressed with the fact that we have raised over €200,000 locally, and we were able to use this figure as a demonstration of Ballinrobe’s strong desire to rebuild the Hall.

“We were also keen to impress upon her the fact that this will be a broadly-based facility, catering for the entire community in a wide variety of ways. The design of the hall has been crafted so that the large auditorium can be easily subdivided on a temporary basis to host events that require less space.”

The committee now hope that the Government will look favourably upon the request for €500,000 in funding.

“The reality is that without this funding, it will be very difficult for Ballinrobe to complete this project. We are committed to raising €400,000 locally, and we are already halfway there. I think this shows that Ballinrobe is serious about this project and what we really need is Government support at this stage,” added Michael.

It is also anticipated that the campaign will access funding from Mayo County Council and LEADER. In both cases, the committee is working closely with both bodies to seek this funding. 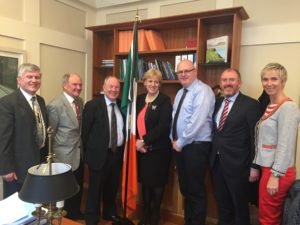